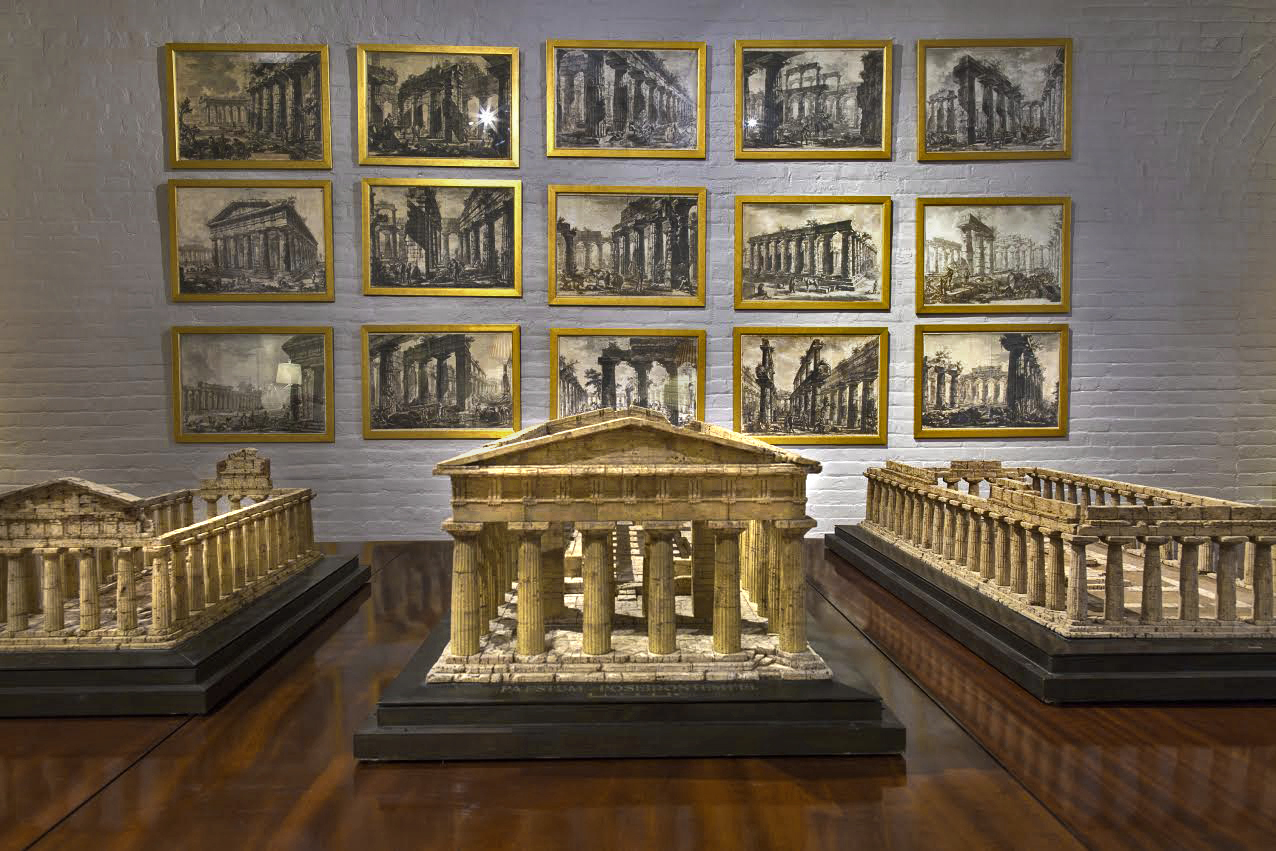 “All the dreams of my youth have come to life; the first engravings I remember…I now see in reality, and everything I have known for so long through paintings, drawings, etchings, woodcuts, plaster casts, and cork models is now assembled before me.”

The tradition of making architectural models in cork can be traced to 16th century Italy. Renaissance historians Giorgio Vasari and Benedetto Varchi both wrote about cork model of the city of Florence described about a “rara e maravigliosa” produced by Niccolo de Pericolo, called il Tribolo, and Benvenuto di Lorenzo il Volpaia. The scale model was commissioned by Pope Clement VII as a strategic device for the Siege of Florence. Tribolo and Volpaia worked for six months carefully measuring every street and building in the city, documenting measurements in braccia, and eventually smuggled the model out of Florence to Rome where Pope Clement used it to plan his military campaign from 270 km away.

By the 18th century, cork modeling evolved to serve more artistic and scholarly ambitions with growing interest into study of the ancient world. Historians, architects, and artists would visit ancient sites, often under archaeological excavation, recording everything they saw by making measured drawings and detailed sketchings. This practice of measuring, recording, and studying naturally led to a need or desire to render these buildings in three dimensionsional models. Not only decorative, these models were used to reconstruct buildings in ruins or used to study or solve problems of structural engineering.

Cork, a material that grows on trees throughout Southern Europe, became a natural choice for these models. Not only does the material resemble the worn and weathered stone of ancient edifices, but it was easy to carve and manipulate. Perhaps, most importantly, it was light, and therefore convenient to transport. The emergence of the Grand Tour produced a healthy market for cork models as souvenirs bought by travelers hoping bring back a home a token of their travels. By 1780 there are documented artists devoted to the medium and soon after cork models could be found in many important collections during the 18th and 19th centuries.

Though cork models date back to the 16th century, Augusto Rosa is considered the originator of precise scaled models of individual antique buildings. Descended from the artist Salvator Rosa, Augusto was a trained architect working in Rome. Unfortunately for most young architects including Rosa and others like Giovanni Battista Piranesi, ambitious building projects such as the Spanish Steps and Lateran facade were coming to an end and prospective new projects were scarce, and creating models provided a means for earning additional income. However, only one model, of the Temple of Poseidon, can be firmly attributed to Rosa now in the Musée d’Archéologie Nationale in Saint-Germain-en-Laye. He traveled with Piranesi in 1777 to study the site and personally took measurements to complete his work. 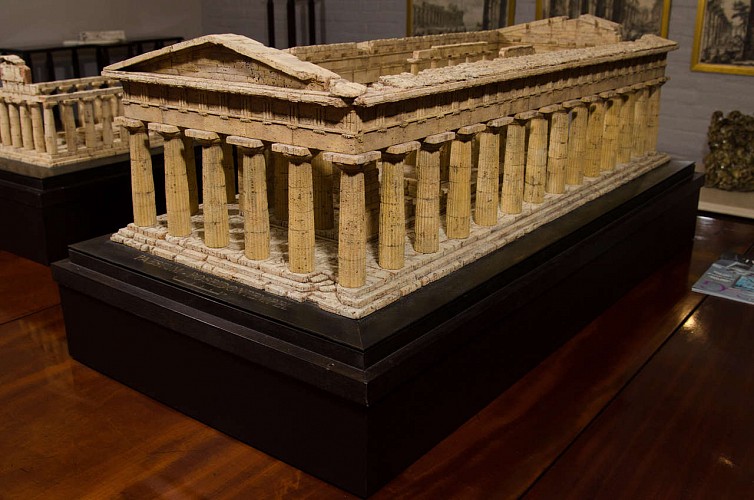 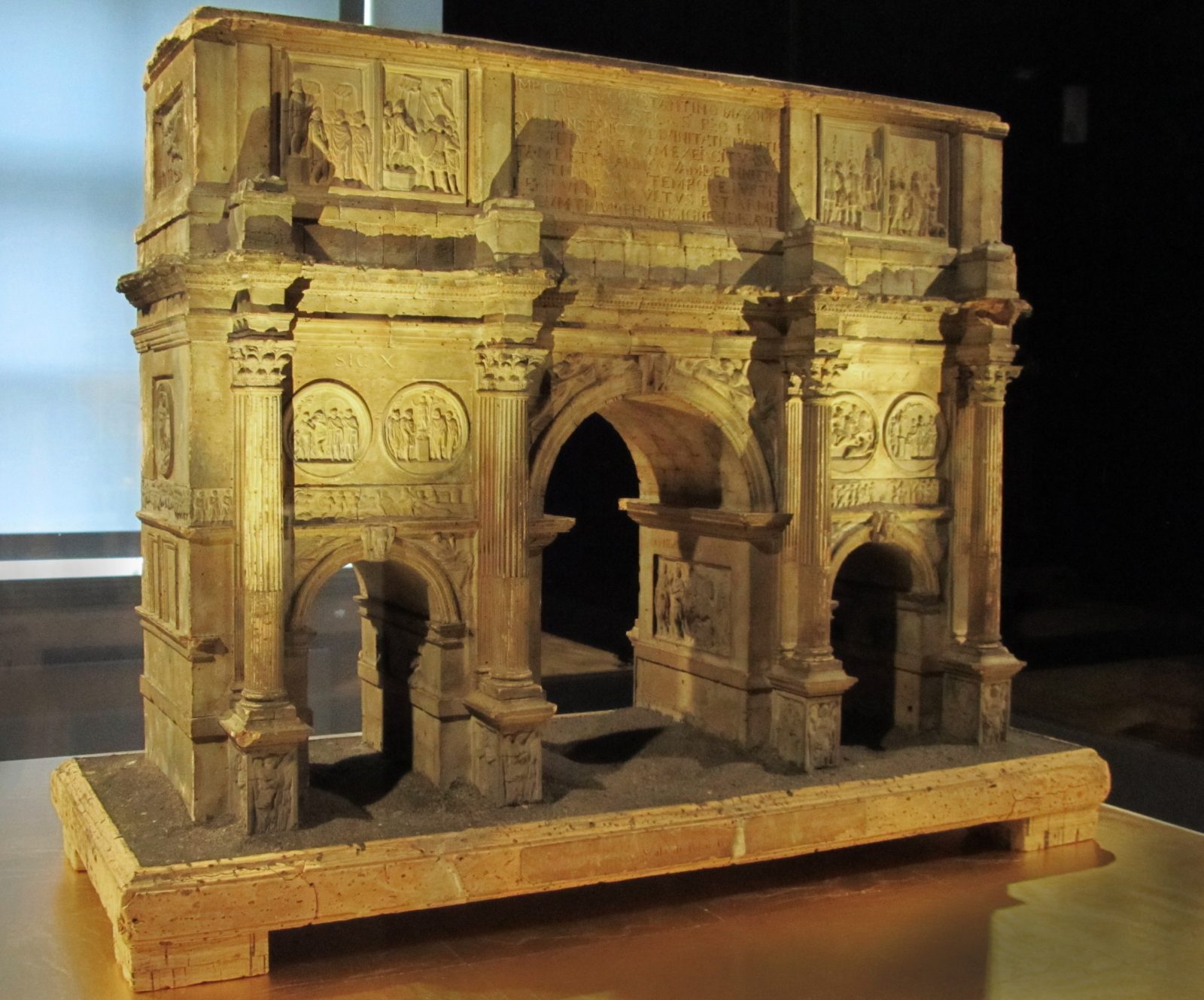 A contemporary of Rosa, Antonio Chichi, was an architect based in Rome who also produced cork models, many of which are now documented. Chichi is known for his archaeological accuracy, often removing later elements of a building from his model and reconstructing original portions to the best of his knowledge. Chichi was known to have an international following with clients as far abroad as the Netherlands and Russia including the Empress Catherine the Great. During a trip to Rome in 1777, Landgrave Friederich II of Hesse-Kassel ordered a series of 36 buildings, the first being the Temple of Vesta at Tivoli and the last being the Pantheon delivered in 1782. Of the collection, 33 still remain and are on view at Wilhelmshöhe Castle. It seems that Chichi had a repertoire of 36 ancient buildings and sites documented in an advertisement published in 1786, which matches the description of the Hesse-Kassel collection. Chichi’s work can still be seen today in many public collections including among others the Russian Academy of Arts in Saint Petersburg, Hessisches Landesmuseum Darmstadt, Herzogliche Museum Gotha, Rijksmuseum, Academy of Arts in Berlin. 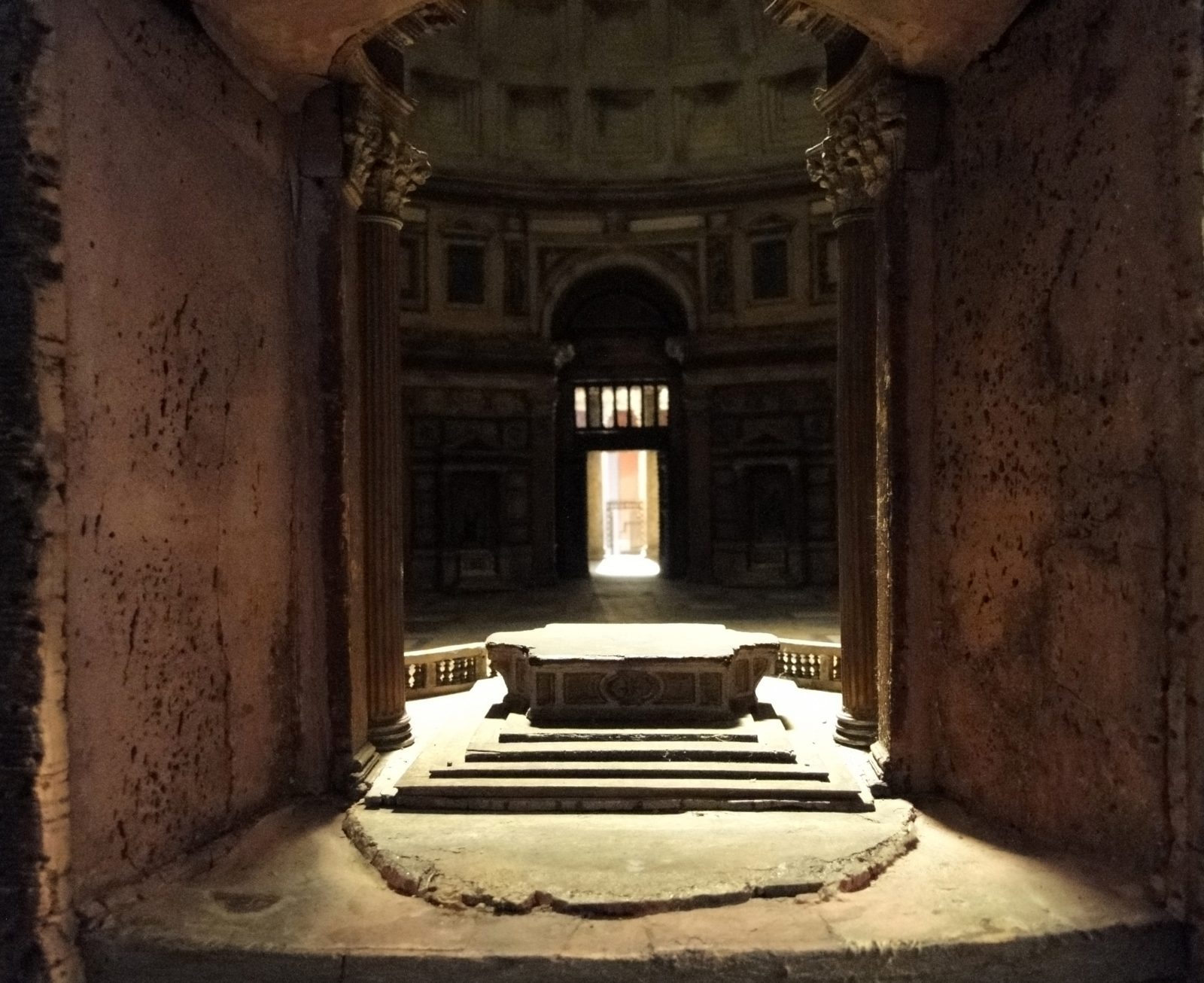 The demand for cork models became such that individuals such as Carl Joseph May produced models without ever having traveled to Italy. Trained as a pastry chef and employed for most of his life by the Archbishopric of Mainz, May was known to have produced 43 different models of buildings. His inspiration must have come varied sources including writings, drawings and prints, or other models.

One of the world’s greatest collections of Cork Models can be found in the Sir John Soane Museum. Collected over a lifetime, these models were displayed only after the death of Soane’s wife Eliza. Completed in 1835, just two years before his own death, Soane transformed his late wife’s bedroom to house and display over 121 architectural models. Likely the largest such collection of models in the world at that time. The model room was dismantled shortly after Soane’s death for conversion into private apartments for the curator of the newly created Sir John Soane Museum. Through careful and extensive study of period drawings, sketchings, and watercolors the model room was reassembled and opened to the public in 2015. 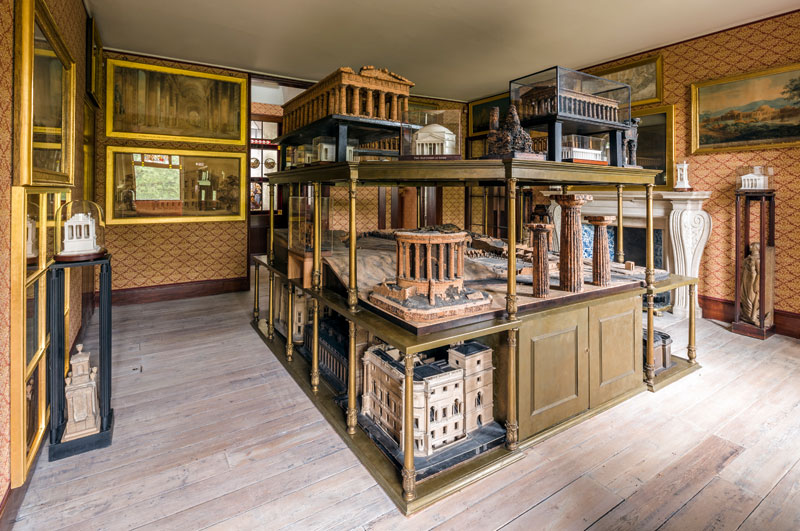 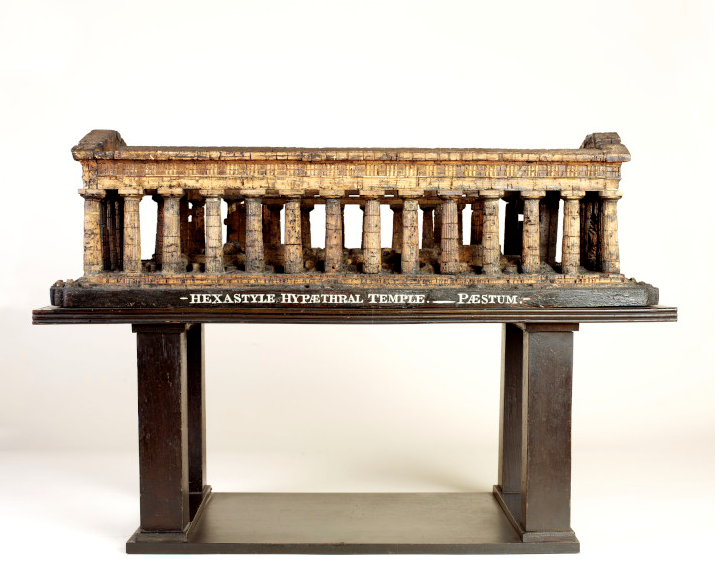 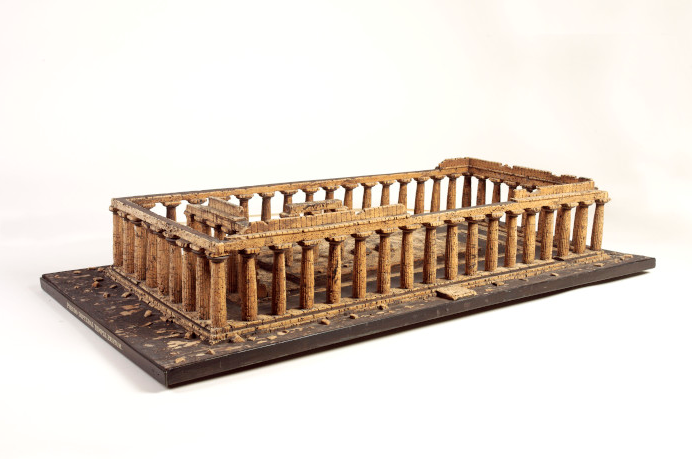 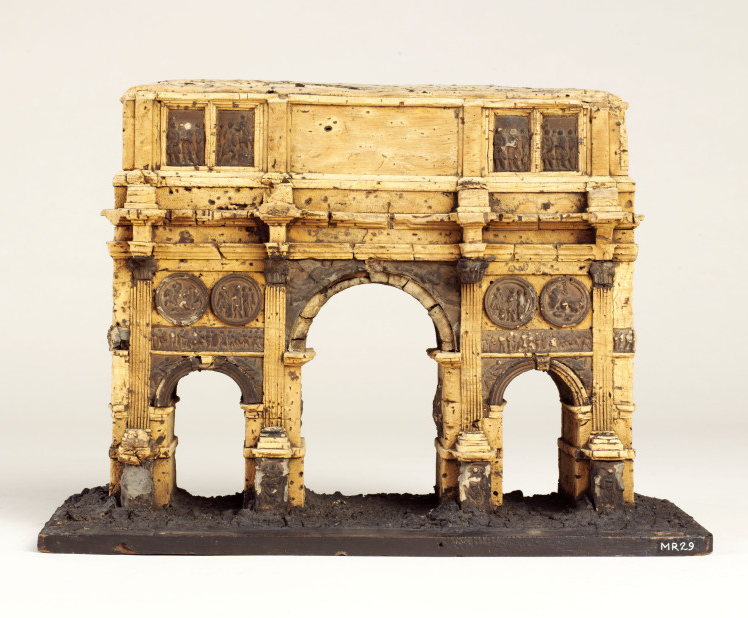 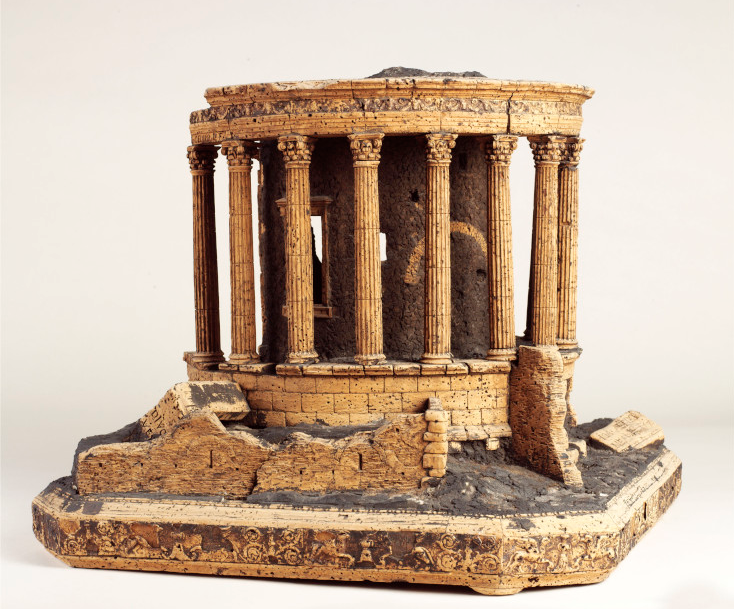