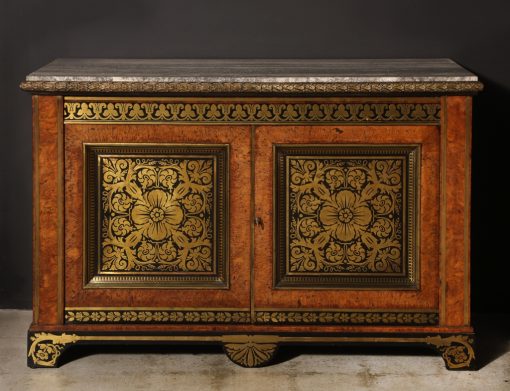 The ormolu-mounted band around the top and the design of the apron and feet are very similar to a cabinet by George Bullock that was supplied for Blair Atholl, Perthshire, in 1817 (see Frances Collard, Regency Furniture, 1985, pg. 124). During the Napoleonic Wars, English interest in French styles began to flourish. After the restoration of the Bourbon Monarchy in 1814, English visitors began to visit Paris again, and lead by influential collectors like the Prince Regent, English cabinetmakers such as George Bullock began to produce furniture both in the Empire and Louis Quatorze idiom. George Bullock also made furniture for Napoleon during his exile in St. Helena in 1815.