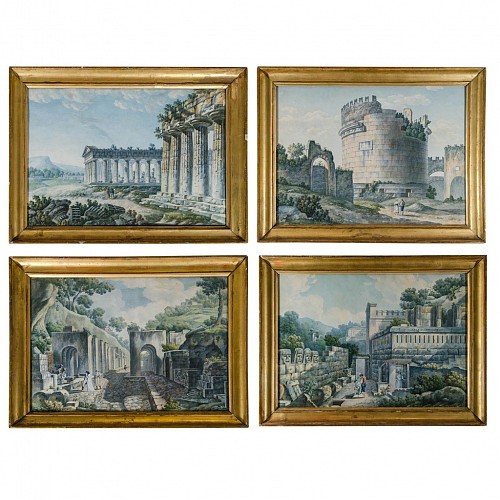 Circle of Abraham-Louis Ducros (1748-1810), the four watercolors include 'The temples at Paestum' and 'The tomb of Cecilia Metella in Rome', along with 'Herculaneum's gate at Pompeii' and 'The Tomb of Mamia in Pompeii'. Measurements include frame.

Wonderfully fresh and vivid yet with a restrained palette of mostly green, blue and grey tones, these Romantic scenes of ancient sites imbued with an atmosphere of nostalgic longing for antiquity are characteristic of art of the Grand Tour. Beginning in the middle of the 18th century, excavations of ancient sites sparked a revival of interest in classical civilization and art unprecedented in its cultural understanding and elegiac sentiments. Not only of interest to scholars and artists studying and portraying these sites, the Grand Tour became a rite of passage for most young noblemen. From 1750 onwards many artists such as Giovanni Battista and Francesco Piranesi, Jean Louis Deprez, and Abraham Louis Rodolphe Ducros collectively tried their hand at portraying the picturesque ruins and temples, but also setting these monuments in a greater social and historical context in order to meet the rising demand of an educated public during the Age of Enlightenment.

Abraham Louis Rodolphe Ducros born in Yverdon-les-Bains, Switzerland was the son of a drawing instructor at Yverdon college. He traveled to Geneva in 1769, to study under Nicolas Henri Joseph Fassin, and after moved to Rome at the end of 1776 working as a landscape painter. He soon made a name for himself as an independent watercolour painter as well, specializing in rendering the principal sights of Rome, for which he received numerous commissions, mainly from English aristocrats. In March 1778, he was hired by two Dutch gentlemen to accompany them on a journey of four months to the Kingdom of the Two Sicilies and Malta where he produced nearly three hundred watercolors now registered in Rijksmuseum. With the engraver Giovanni Volpato, he published in 1780 twenty-four prints representing views of Rome and its surroundings. Their collective project, Vues de Rome et de ses Environs, was a cultural and commercial success. Volpato’s large outline etchings, skillfully coloured by Ducros, had an extremely suggestive effect and enjoyed great popularity as a competitive alternative to painted capricci.

Ducros’ career came to an abrupt end in 1793, when he, like many other artists, was banned from the Papal State because of his republican sympathies during the French Revolution. He then moved to Abruzzo and later settled in Naples until 1799, serving a small yet

cultivated circle of connoisseurs and art lovers including Sir William Hamilton, the Scottish diplomat, antiquarian and archaeologist, and Sir John Acton, Prime Minister of Naples under Ferdinand IV with delightfully rendered views of places like Campania and Etna. Ducros returned to Switzerland in 1807, first to Nyon and then to Lausanne. In Geneva, he was appointed honorary member of the Society of Arts, and later in 1809 also appointed professor of painting at the Academy in Bern 1809. Unfortunately he was not able to enjoy his last position, as he died February 18, 1810, before he was able to formally take his position. The two largest contemporary collections of Ducros’ works are now the Cantonal Museum of Fine Arts and Stourhead House in Wiltshire. 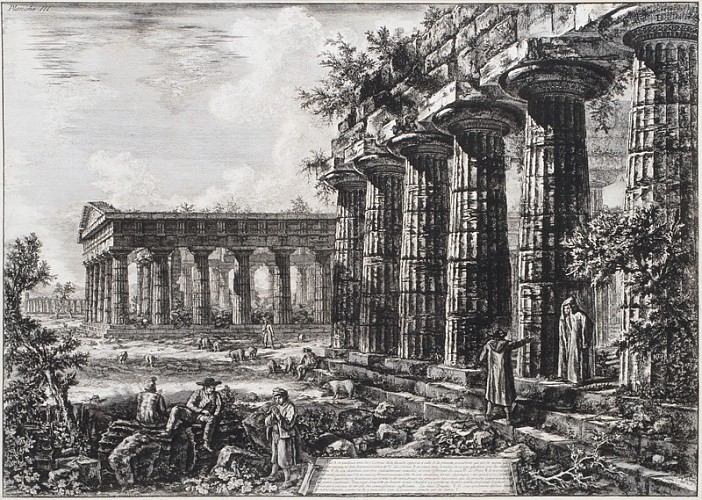 The Temples at Paestum

Depicting a view of the three great Doric temples in the former Greek colony of Poseidonia, which in the third century B.C. was conquered by the Romans and renamed Paestum. Left abandoned in the Middle Ages and cut off by a swamp, Paestum’s ruins were rediscovered in 1746 thanks to the construction of a new road. They sparked intense interest among artists and architects including Giovanni Baptisti Piranesi, whose 15 drawings from 1777 (Piranesi’s most detailed and extensive body of work devoted to a single topographical site), along with other consequent drawings, prints, paintings and models of the temples revolutionized people’s understanding of Classical architecture. Ancient Roman architecture, which was emulated throughout Europe until this time was deemed derivative of the earlier Greek style resulting in a careful reconstruction of these older models, especially the Doric temple. 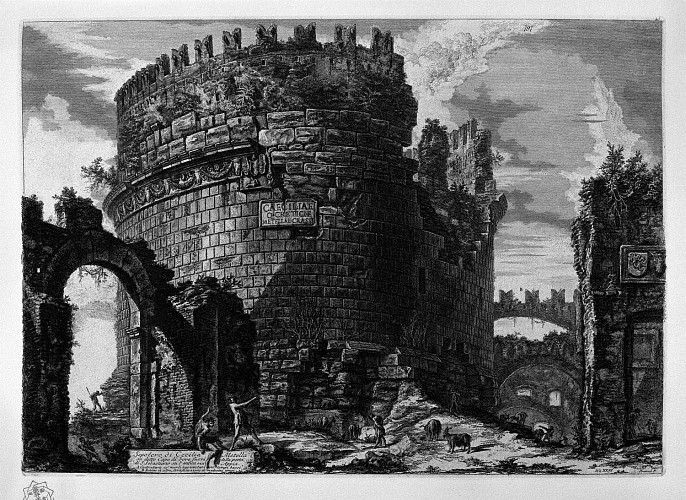 The Tomb of Cecilia Metella in Rome

The Tomb of Caecilia Metella is a mausoleum located outside of Rome at the three mile marker of the Via Appia. It was built during the 1st century B.C to honor Caecilia Metella daughter of Quintus Caecilius Metellus Creticus, a Consul in 69 B.C, and wife of Marcus Licinius Crassus, son of the famous Marcus Crassus who served under Julius Caesar and famously known as the richest man in Rome during the 1st century BCE. The tomb was converted into a massive fortress in the 14th century, evidenced by the later crenelations, and used to guard the road as well as exact tolls. 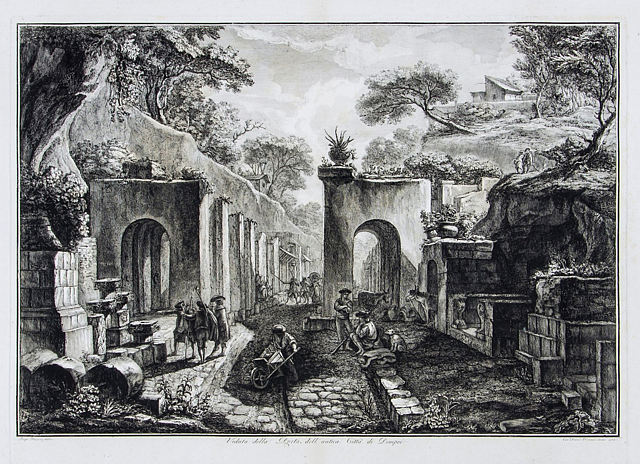 A fine, exceptionally rare view of the excavations at Pompeii, after the drawings of Desprez and etching executed Franceso Piranesi. Louis Jean Desprez (1740-1804), trained as a stage designer and architect, was a talented watercolorist. Commissioned to do a series of views of the picturesque ruins surrounding the Bay of Naples, he completed this view in outline only, before travelling to Sweden under the patronage of Gustavus III. The copper plate was then worked up, completed and published by Francesco Piranesi

The Herculaneum’s Gate is situated in the Northwest corner of the city walls on the Via Consolare. It consists of 3 passageways, originally all arches. The large central one intended for carts and wagons while the two flanking archways catered for pedestrians. The gate dates to the years when Pompeii was transformed into a colony by Sulla, when the walls and gates no longer served any defensive purpose. 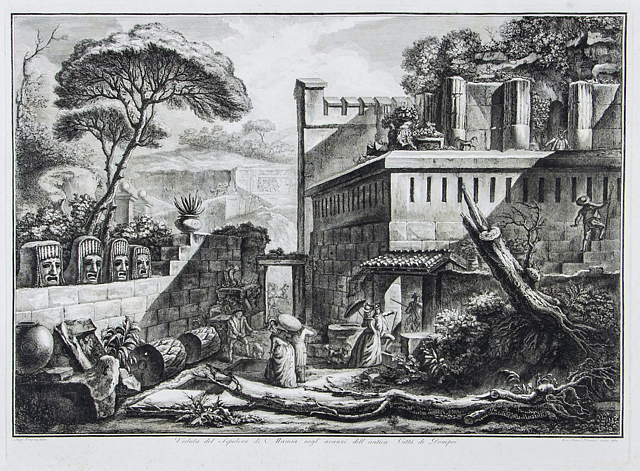 The Tomb of Mamia in Pompeii

The present scene shows a picturesque motif from the ancient city of Pompeii, where the archaeological excavations had begun in 1748. Pictured are the ruins of the “Tomb of the Priestess Mamia”, which had been discovered between 1758 and 1764 by the Swiss archaeologist and military engineer Karl Jakob Weber (1712–1765). Originally illustrated by Desprez the scene had a deliberately theatrical character by having the protagonists, well to do tourists dressed in the latest fashions, act as if on a very confined stage. The present scene illustrated nearly 30 years later, marks a change from celebrating the adventures of fashionable travelers, to a humbler depiction of locals underlining the picturesque and somewhat macabre ambience of the abandoned site a theme to pervade much of Romantic thought throughout the nineteenth century.

Giovanni Battista, or Giambattista, Piranesi was born in Mogliano Veneto, then part of the Republic of Venice during the height of Rococo extravagance. His father, Angelo Piranesi, is recorded as a tagliapetra, or stonemason, but evidently worked as a master builder. His brother, Andrea, taught him Latin introducing him to Classical literature and Antiquity. Later he studied as an architect under his uncle, Matteo Lucchesi, a leading hydraulic engineer in the Magistrato delle Acque. At the age of Twenty, Piranesi moved to Rome along with Marco Foscarini, a Venetian envoy to the Vatican. Rome, already the center of the Grand Tour, was becoming the intellectual and artistic capital of Europe; however, while young Piranesi undoubtedly encountered one of the most visually enthralling cities of the continent, outside of the grand monuments from antiquity and the few select contemporary projects such as the Piazza di San Pietro or Piazza Navona, the opportunities for young architects were scarce. The natural and most obvious means of livelihood for a talented young artist was the production of vedute, or views of city scapes, which were popular souvenir gifts. Giovanni soon found himself in the studio of the famous view painter Giovanni Paolo Panini and also contributed some of his etchings to Giuseppe Vasi for his compendium Le Magnificenze di Roma.

In 1743, Piranesi published his first independent work, Prima Parte di Architetture e Prospettive. Breaking away from the tradition of assembling together existing ruins in ideal settings, Piranesi drew conceptual inspiration directly from ancient architecture to create etched plates of his own ideal structures and dramatic ruin scenes. Drawing from his background in architecture and engineering, the vision for his ‘speaking ruins” was transform these ruins from antiquity from objects of study into a language of design. This seminal work became a guiding principle used by the French Academy in Rome with which Piranesi had a close working relationship and would later strongly influence native French Neo-classicism.

Traveling to Naples in the 1750’s, Piranesi became greatly influenced by the discoveries from the excavations at Herculaneum, as did many others during the waxing influence of the Enlightenment, leading to a new understanding and interpretation of Antiquity. No longer solely interested in the merely visible, scholars became interested in the social aspects and cultural history of these sites. Spurred by Camillo Paderni, who would become director of the Excavation Museum at Portici, Piranesi began to pour his energies into representing the widening concerns of archaeological discovery in his etchings and drawings. Beginning with reconstructions of Roman funerary monuments in 1752, Piranesi soon began to travel to various sites documenting historic sites up until his death in 1778.

Francesco Piranesi was born in Rome, the eldest son of Giovanni Battista Piranesi. He was instructed in engraving by his father. By 1775, he was both engraving his own works of art and assisting his father. He then started to study with other experts: engraving with Giovanni Volpato, landscape painting under the German Jacob Philipp Hackert and his brother, Georg, and architecture under Pierre-Adrien Pâris.

Piranesi accompanied his father on two trips to the ancient Roman ruins in Pompeii, Paestem and Herculaneum, first in 1770, and again in 1778. In this he was part of a group of engravers which collaborated with Benedetto Mori and the architect Augusto Rosa, considered the inventor of felloplastica, the art of constructing scale models of ancient monuments in cork. Giovanni Battista created a series of preparatory drawings about Paestum, which were completed by Francesco.

Upon his father’s death, shortly after the second trip, Francesco acquired his father’s publishing house and was responsible for printing most of the later editions of his prints.

In July 1781, Louis-Jean Desprez and Francesco Piranesi published a “Prospectus” in which they announced a set of Italian views made as dessins coloriés. The views comprised a series of large etchings by Piranesi after designs by Desprez, who then coloured them with watercolours and gouache. The pamphlet lists forty-eight sheets showing views from the Kingdom of Naples and Sicily as well as from Rome. Finally, only ten views of this ambitious project were ever realized.